How to recover files and data from a faulty hard drive

Following on from my post about how to replace a laptop hard disk, this post focuses on data recovery from a faulty hard disk.

Firstly the reason the laptop hard drive failed on my flat-mates laptop was because  it was overheating. This was a combination of dust inside the case, vista being a bit heavy and some undetected viruses on the machine. So to save yourself issues, if you notice you laptop/desktop getting hot or over heating, make sure that it is free from viruses and give the insides a clean!

I cannot guarantee that using the method descibed below will recover lost data on a hard disk, as hard drives can break down in many different ways, however it did work for me, so it may do for you.

Hard disk is faulty and cannot be read correctly.

The disk I recovered data from wouldn’t get past a certain part in the boot-up sequence. I removed the disk from the machine found it to be a SATA drive.  Interestingly if you have a 3.5 inch disk caddy for a SATA disk drive, you may be able to conect a 2.5 inch laptop disk to it (which is what I did). The SATA and power connectors are the same.

After I removed the disk and put it in a caddy, windows reported that the disk couldn’t be read as it wasn’t formatted.

After a bit of research and searching I came across two completely free tools that can help you recover data. They are made by the same people, or should I say person, Christophe Grenier at www.cgsecurity.org

The first one I tried was testdisk http://www.cgsecurity.org/wiki/TestDisk 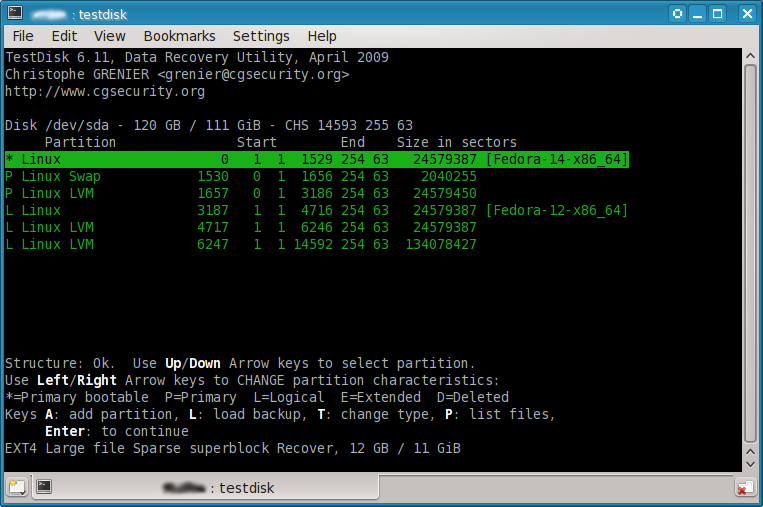 It is designed to recover lost partitions. As you can see it doesn’t use a GUI (graphical user interface) instead it uses text commands. Its not too difficult once you get the hang of navigating it using just a keyboard and there is quite a lot of user support if you get stuck on the authors website, including a walk-through guide.

I tried it several times with different options without success. If it had been successful, I would have been able to read the disk as normal, so I had to try something else, plan B.

The second piece of software I tried was PhotoRec: http://www.cgsecurity.org/wiki/PhotoRec 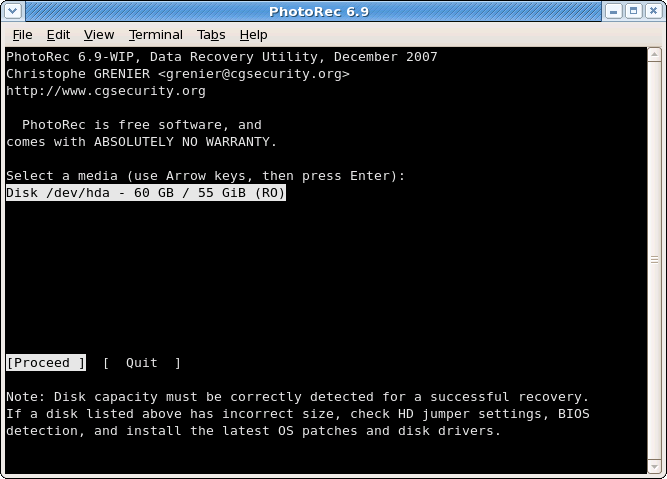 Another text based user interface program!

This software doesn’t worry about partitions it just looks at the data blocks and clusters on the disk. The upshot of this is that you can recover any data on a disk if the partition table is missing, as long as the drive is not physically damaged in such a way that makes the disk unreadable. This includes previously deleted files and files from a drive that has been re-formatted.

After going through some of the options in the program, you can choose which type of files you want to recover: 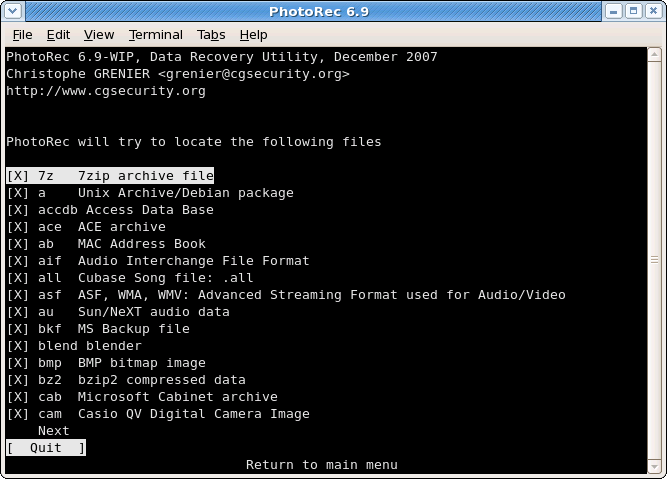 Choose the file type(s) to recover

This is extremely useful, as instead of recovering all the data from the disk, you can just recover certain files such as picture/photo files including bmp and jpg files. Of course you can still recover the whole disk if you want to.

The one downside of recovering all of this data is the original file name will be lost. So if you had a some photos and one of them was called, ‘midnight in paris.jpg’ this information will be lost and instead you will get a list files that looks like this:

This means you will have to go through the results find the photos you want and rename them with a more suitable name. But at least you get your files back!

It was this second method that enabled me to recover my flat-mates files and make him a very happy chappy indeed.

Just make sure you have an up to date anti-virus when you recover old data from someone else’s disk!

PhotoRec is a very powerful tool and enables you you recover data from damaged disks. This is not its limit though because it can also recover data from CD-ROM’s and memory cards such as SD and MMC. It also runs on many operating systems:

And can recover data from multiple file formats:

This entry was posted in How to guides. Bookmark the permalink.